You are here: Home / Technology / Design for High Availability / Evaluation of downtime risks / Methodology of analysis

In the second phase, logic or virtual components are duplicated and arranged in parallel in order to achieve better availability.  The evaluation is limited to duplication of two components of the solution in order to limit the scope of the analysis.  Although the study is not concerned with the costs of modifying an architecture, duplication should be applied with caution since it creates additional costs, both in the design of the solution and in its deployment in a physical environment.

As noted in section A different paradigm, dependencies between components create a directed acyclic graph.  The component at the system root must travel several nodes to reach each of the other system components.  The length of a path between two nodes is calculated based on the number of edges between them; the distance is the length of the shortest path [1].

The availability of a software solution comes in two steps.  As noted in the methodology of Tsai and Sang [23], the first step is to determine the components of the software solution that can be connected in series or in parallel.  Conversely, subsystems connected in parallel must be composed only of duplicates, and must remain interchangeable since they must serve the same service. 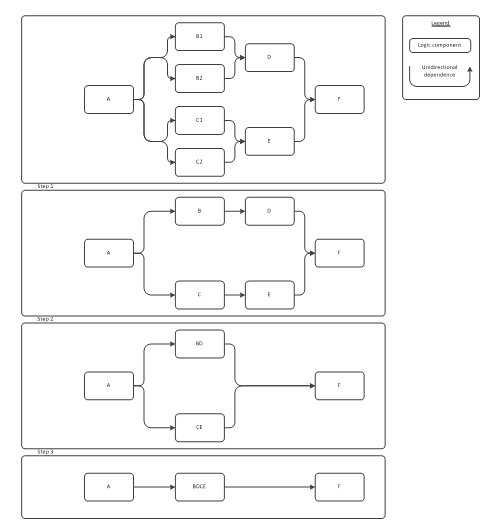 Next, you have to identify if the component is part of parallel systems.  Once this is done, it is possible to determine the systems, parallel and series, which include the logic component in question.

We must next establish the hierarchy of the systems of which the component is part of, and calculate the parallel and series systems of this hierarchy.  This allows identification of the impact of the component’s availability on the solution.

For example, in the case of the system of the figure at the beginning of the page, where the availability of components C1 C2 C3 C4 and C5 is precalculated and is 0.5, the contextual availability can be calculated as follows: